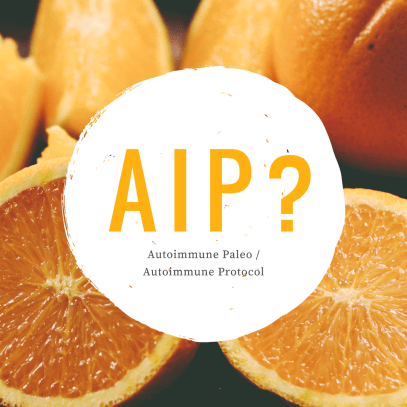 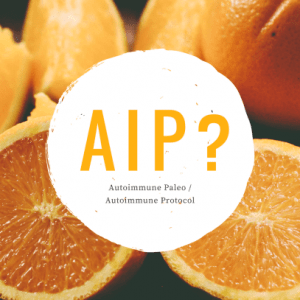 I’ve been tip toeing around Autoimmune Protocol (or AIP) for almost a year (more like ice skating around it). When I originally looked into it, I saw how restrictive it was and decided it was not for me. No thanks! First of all, I already have myasthenia gravis, why would I voluntarily torture myself with AIP? So I decided to just “eat healthy” instead cuz I needs my weekly indulgences.

As time has progressed, I remain intrigued by AIP and if it really could be the thing that propels me from “coping” with my myasthenia to “thriving” with my myasthenia. I’ve heard the success stories and accolades from my fellow autoimmuners but with my luck it’d have the opposite effect. Probably send me downward in a spiral to the hospital. My aversion to change isn’t mental. My body literally rejects change. I can’t even change my soap without breaking out in hives. One can only imagine what a dramatic shock to my diet will provoke. I digress…

I was already thinking of starting AIP but I got my confirmation from my body this past weekend. After a routine trip to a restaurant, Suddenly I was stricken with something I can only compare to plucking out your nose hairs with tweezers… a slow painful elongated disaster. I’m talking sharp stomach pains that rang down to my toes mixed with non stop watery bowels with a little acid reflux and nausea just to top it off.

For the past four days I haven’t been right. I’ve been nursing myself with pepto, gingerale and chicken broth. I don’t know what happened, maybe it was something I ate. Whatever the case, my body hated it and I need to figure out what triggered me. This tipped the scale for me. Seems like the time is now.

Whatever you want to call it, AIP It’s super restrictive and super intense. The goal is to eliminate any foods that have the potential to inflame or cause reaction in your body. Once you have eliminated all these foods you then start the process of reintroducing those foods one at a time into your diet. Basically, it allows you to really see which foods are friends and which are foes.

The list of NO foods in the elimination phase is extensive. Like fine.. take away my yogurt and granola. No cheese you say? Ehh alright. But when you say no eggs?!?!?! You need to shut your mouth. Eggs are my breakfast go to. If you want a complete list of AIP yays and nays, just google it or you can check out this site.

I admit this will be a challenge. One of the reasons I’m willing to take a stab at it is because there is light at the end of the tunnel. Many have boasted about their success with reintroductions of a lot of their favorite foods. I’m hoping that I’ll only have one food foe and I’ll be able to pinpoint it that sucker quickly.

Even though I still have my reservations about my ability to be successful, I’m just going to do it. I think my success will rely heavily on three things: Mindset, Discipline and Support.

So wish my luck on this new journey. I’m going to start with one month and see how I feel. That’s the whole reason I’m doing this. I want to feel better and to feel more connected to my body and what I’m putting in it. Who knows I may want it to be a permanent lifestyle and not even bother with reintroductions.

Yea.. that was a lie. I’m going dive into reintroductions like I’m Michael Phelps.

P.s I’m going to go ham on all the things I’m not allowed to have. One final bite won’t hurt.

8 Things Unsaid to Friends and Family about Chronic Illness

How to Survive Summer with Myasthenia Gravis