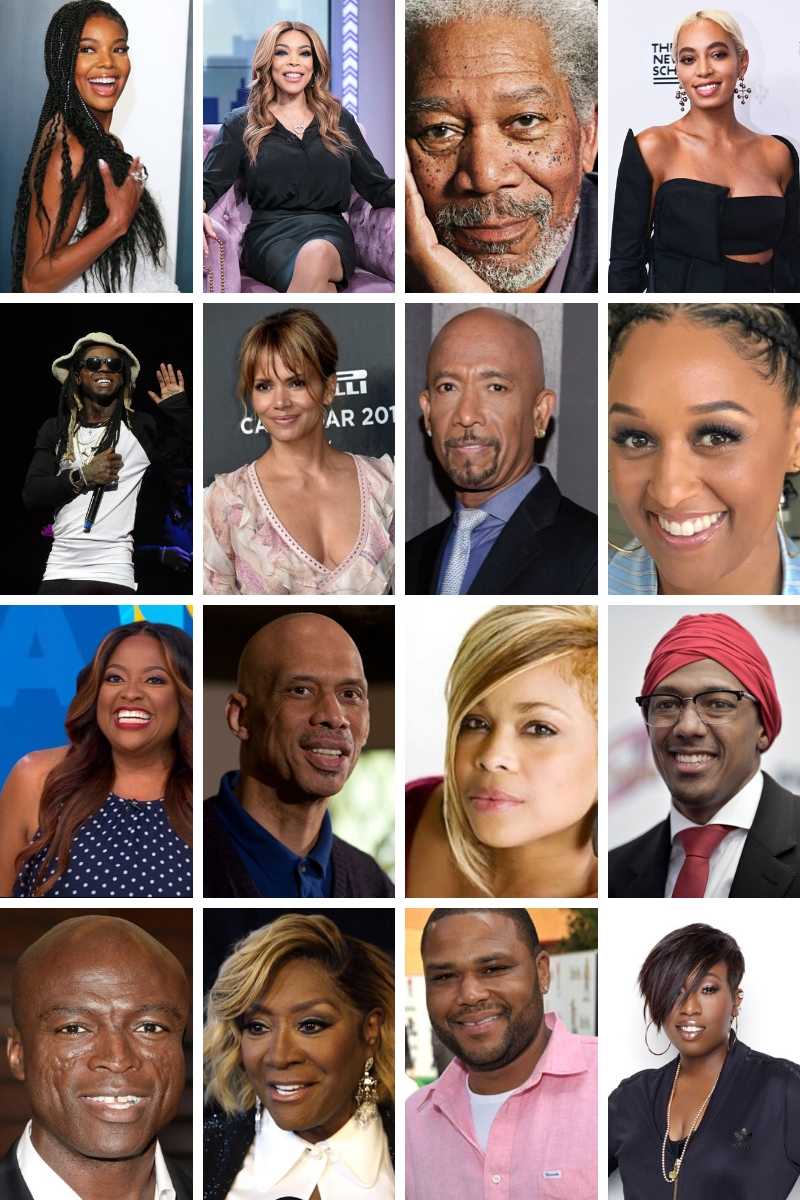 Most of February has been dedicated to Self Love but I wanted to take a minute to also acknowledge that it’s Black History Month. Here’s a list of Black celebrities with chronic illnesses.

As we know, having a chronic illness can make you feel alone and isolated. I personally feel as though being a spoonie of color puts you further in isolation. So I wanted to do research to find some powerhouse celebrities who you may or may not know have chronic illnesses as well.

1. Gabrielle Union (actress, activist and author) has openly discussed her struggles with infertility and her adenomyosis diagnosis. Adenomyosis is a condition that involves the encroachment, or movement, of the endometrial tissue that lines the uterus into the muscles of the uterus. This makes the uterine walls grow thicker. It may lead to heavy or longer-than-usual menstrual bleeding, as well as pain during your menstrual cycle or intercourse.

2. Solange Knowles (singer, songwriter, record producer and actress) revealed in 2017 that had an Autonomic Disorder. The chronic illness has a wide range of symptoms such as fatigue, feeling faint and weakness.

3. Kareem Abdul Jabbar (former NBA player) has a chronic illness known as chronic myeloid leukemia or CML for short. CML is a a from of cancer in a person’s bone marrow causing it to make too many white blood cells.

4. Tia Mowry (actress) was diagnosed with endometriosis, a disorder causing tissue to grow outside of the uterine cavity , at the age of 30. She has been very vocal about spreading awareness of the illness and the impacts on her life as a black celebrity with a chronic illness.

5. Lil Wayne (rapper) has an ongoing battle with epilepsy and the associated seizures that accompany the neurological disorder.

6. Morgan Freeman (actor) is was diagnosed with fibromyalgia after a car accident in 2008. Fibromyalgia is  a chronic illness characterizes by muscoskeletal pain, fatigue, sleep and memory issues.

Type 2 diabetes is a chronic illness condition that affects the way your body metabolizes sugar. It’s a life long disease that requires monitoring.

7. Anthony Anderson (actor) has been living with type 2 diabetes since 2002. Anderson’s father also had the illness and passed from it which prompted Anthony to make changes in his own life. He has has since become an advocate for the illness.

8. Halle Berry (actress) was originally thought to have type 1 diabetes (diagnosed at age 22). After slipping into a coma, she was diagnosed with Type 2 diabetes. In 2018 Halle took to her platform to promote the Keto diet as how she’s been able to keep her illness under control.

9. Pattie Labelle (singer, business woman and author) was diagnosed with type 2 diabetes almost 25 years ago. She found the diagnosis to be a wake up call regarding her diet and lifetsyle.

10. Sherri Shepherd (talk show host) was diagnosed with type 2 diabetes in 2007. However, it wasn’t until 2018 when she was able to find success in her battle through a no sugar diet.

Graves disease is an autoimmune disorder that causes an over active thyroid, a small butterfly shaped gland in the front of your neck. It’s more common in women than men.

11. Missy Elliot (singer, songwriter and producer) found out she had graves’ after experiencing tremors and almost crashing a car. She received radiation treatment to alleviate her symptoms which has been very successful for her.

12. Wendy Williams (radio personality and talk show host) announced to her viewers in 2018 that she had Graves disease and needed to take 3 weeks off to deal with her health. She has since spoken out about the chronic illness in efforts to build awareness.

Lupus is an autoimmune disease where a person’s immune system is overactive and attacks healthy tissue causing inflammation, swelling and damage to several areas of the body like the joints, skin, heart and lungs.

13. Nick Cannon (entertainer and tv personality) announced in 2012 that he had lupus. He has chronicled his battle with the illness through online videos and advocacy efforts.

14. Seal (musician) has a specific form of lupus called discoid lupus erythematosus (DLE) that affects the skin above the skin causing the scarring on his face.

15. Toni Braxton (singer) is very well known for her ongoing battle with lupus. In 2008 she collapsed while on stage, the events led to her diagnosis. Her chronic illness has taken a toll on her career impacting her ability to perform.

16. Montel Williams (talk show host) discusses how he was experiencing symptoms of MS for years prior to his actual diagnosis. MS is a chronic illness that affect the nervous system causing fatigue, numbess and vision problems.

17. Tionne T’Boz Watkins (singer) was diagnosed with sickle cell as a child. Sickle Cell is an inherited red blood cell disorder in which there aren’t enough healthy blood cells to carry oxygen throughout the body.

18. Venus Williams (tennis champion) was diagnosed with Sjogren’s syndrome in 2011. Sjogren’s is an autoimmune disease that attacks the glands responsible for tear and saliva production causing chronic dry mouth and dry eyes.

19. Winnie Harlow (model) despite being diagnosed with vitiligo, a skin condition characterized by patches of skin and hair losing their pigment, at the age of 4, is an icon for finding beauty in differences. Her advocacy efforts in explaining the emotional aspects of living with vitiligo are long documented.

These are just some of the examples I found. I know that there are probably more black celebrities with chronic illnesses. They may be misdiagnosed or prefer to keep their diagnosis under the radar.

Why You Should Know about Holistic Wellness

Do You Need a Chronic Illness Warrior Mindset?