Fear: a distressing emotion brought about by impending threat danger or pain; concern or anxiety; something that causes feelings of dread or apprehension. I’ve talked about fear before but it seems it has come back to haunt me.

This past weekend I was out with my friends and I was confronted by one of my greatest fears. No, I don’t mean a giant bastard bug or some hybrid beast. My friend’s husband looked at me and said “you have a lazy eye or something?”. That’s right! My fear of having my MG show in public had become a reality.

This exact scenario has been a fear of mine since diagnosis: to be stared at and judged while my MG symptoms are on display. It may seem trivial to be consumed at the thought of someone formulating some lame ass opinion of me after looking at me for a few moments. And when I take into consideration all the other things I’m dealing with such as balancing my medications, doctors appointments and managing stress you’re right. It’s miniscule.

I’d like to take this time to point out the irony that fear is a stress response and stress is a MG trigger. So essentially my fear of showing my MG causes an uptick in my MG symptoms. Thus giving people more to look at. I digress.

When at its peak my MG is Freddy Krueger, Micheal Myers, Candyman, the Boogeyman etc. I see myself as some hideous beast that haunts me in my dreams and when I’m awake. I’ve spent the better part of two years masking my MG from the world through creative cover ups or just staying home all together to avoid society.  These have been the best ways to avoid a slip up but it was only a matter of time.

So it happened. My fear had come to fruition. It was something out of a movie or tv show. The moment elongated and the words echoed in my head. All I wanted to do was crawl inside of myself and disappear. One comment made me revert back to hating myself, my disease and my circumstance. I looked down and away in shame and started to put my hand up to cover my eye.

But then I realized something. Nothing else happened. No one else turned and stared. I didn’t fall apart into a million pieces. The world didn’t end. There I was face to face with my fear (and survived). I’m not really sure what I thought would happen but it didn’t. I just rolled my eyes and said “yea something like that” and continued to enjoy my evening.

I’d love to say that I’m over my fear of showing my MG in public. In a perfect world, I’d end this post confessing that I’ve overcome it… but that’s a LIE. What I will say is that I’ve learned that most things we internalize and make into giant things aren’t really a big deal to others. Don’t get me wrong. There are a*holes who will stare and comment. There’s just no way around it. Toughen up buttercup.

While I’m not fearless (yet) I’m doing the work daily to accept myself (MG and all). I’m sure this won’t be my only MG slip in public ever but I’ll just learn to deal with it. Each time I’ll become more comfortable with it. And if any jerk has the nerve to make a comment, I’ll charge it to their ignorance about me and my MG.

– Not that scared anymore 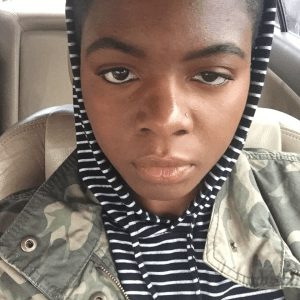 You may also enjoy:

Life with a chronic illness can be difficult and down right depressing. I created Is Was Will Be to help lighten your load and inspire you to find your happiness. Spend some time with me and let's travel this journey together.

Stay in the Know

7 Benefits of Swimming for …

I Gained a Devastating 30 …

Create Space for the …

Do you have Insomnia? …