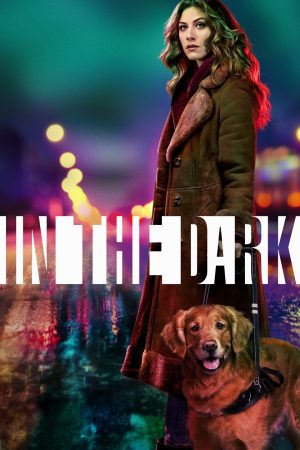 During my extended birthday vacation, I was forced to turn to streaming and binge watching various series to keep myself from going stir crazy. I stumbled upon this gem, In the Dark.

As far as genre preference, I’m a lover of comedies first and foremost, dramas second, then I’m evenly open to everything else with the exception of sci-fi. Sorry superheroes just don’t do it for me.

In the Dark Trailer

I digress, In the Dark is a CW series featuring a young heroine, Murphy, who happens to be blind. There aren’t a whole lot of series featuring people with chronic illness so I was pleasantly surprised when I read the synopsis.

The storyline features an irreverent blind woman in her twenties, Murphy who drifts through life. She has only two friends- Jess, her childhood besties and Tyson, a teenage drug-dealer.

One day while out for a walk with her guide dog, Murphy finds dead body that she assumes to be Tyson’s, but it disappears before the police arrive. When they do not seem inclined to investigate, Murphy becomes obsesses with figuring out what happened to her friend.

Relating to In The Dark

No spoilers here because I really want you to watch if you have time. While the title itself drew me in, Murphy’s personality kept me watching. As I watched the In The Dark series, I realized her condition made her relatable to me and my life with chronic illness.

Murphy went completely blind when she was 14 years old. Her life changed forever and there was nothing she could really do about it but adjust. I was diagnosed at 27. I always wonder if being healthy and then becoming ill is better than just being ill since childhood.

Murphy is tough and super-guarded. It’s not shown if she was that way prior to going blind but it’s quite apparent in her interactions with everyone. She only lets certain people help her (her best friend Jess and Tyson). When she’s not with them, she’s determined to do it own her own.

Murphy’s family opened a guide dog training center called Guiding Hope, as a result of their daughter’s illness. As much as Murphy pushes them away and acts out, her parents are there to support and uplift it. They only want the best for her, but respect her need to figure it out on her own.

One of the things that Murphy has is a routine. She’s a regular at all of her places and knows them by name. Routine keeps her safe and helps her function independently.

Never in a million years would you think a blind woman would solve a murder but she did. Even without her vision, Murphy accomplished greatness which is something every person with a chronic illness aspires to do (atleast I do).

Even though Murphy is the heroine, she is not without her demons or dark side. At times, she can be very self consumed and focused to the point of recklessness. Those are traits, I know I’ve exhibited in the past. I never realized that all illnesses (despite origin, symptoms or prognosis) often leave their hosts with a special mark.

In the Dark Cast

Who are the stars of In the Dark series you ask?

Where Can you Watch In the Dark?

The series premiered on April 4, 2019 on The CW. But I binge-watched Season 1 on Netflix. The second season will premiere on April 16, 2020 and I can’t wait to watch it in real time.

Hopefully it won’t disappoint because The CW has already renewed the series for a third season.

Have you seen In the Dark? What did you think about it? What other shows are you currently watching on Netflix, Hulu or otherwise?

No {Stress} Zone: Coping with Stress and Chronic Illness

Migraines: The Worst Headache I’ve Ever Had

20 Foods You Should Eat to Help Ease Anxiety