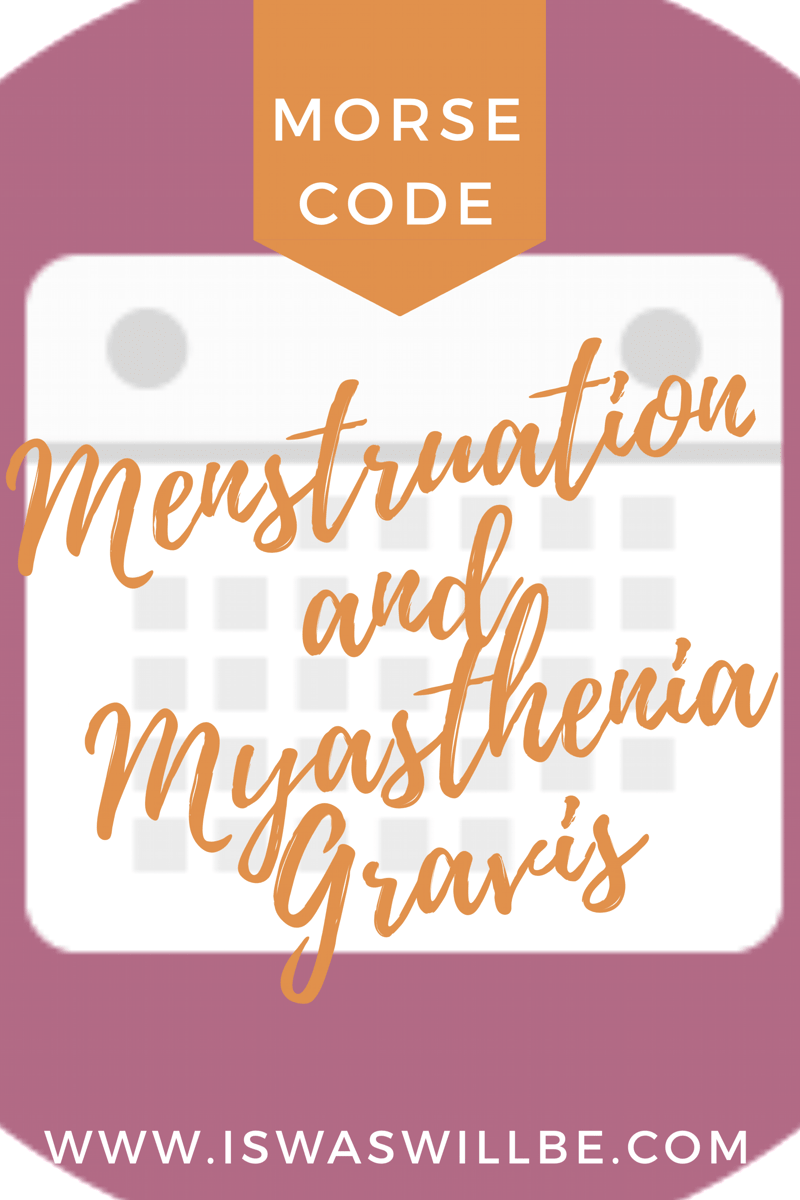 It’s been months since I’ve done an overall status check in. Mostly because nothing has really changed in my health. I’m holding steady in seeing great improvement since my thymectomy. However, I still have days when great is just ok. After months of tracking I’ve concluded that my menstruation most definitely affects my MG.

I’ve mentioned this correlation before (a few months ago actually). Here I am, months later, even after the progress I’ve made post surgery still finding my most challenging days to be surrounding my cycle (or as my brother unknowingly named it for me ‘Morse Code’). It’s an appropriate name because it’s hard to understand unless you’re well versed in it.

While many women suffer PMS, I find that my PMS fatigue far exceeds that of “normal” fatigue. My legs start to feel heavier. I find it difficult to open a simple bottle of water. My vision starts to blur and I get the of awful migraines.

I know I can’t be the only woman with MG this happens to. So I turned to my ebff (electronic best friend) to find some answers. I was only able to find ONE discussion board and ONE scholarly article that really discussed this phenomenon. There’s a lot of technical mumbo jumbo in here but the basic premise is that they took a bunch of women and 67% of them reported an influx in their MG symptoms 2-3 days before their period and it lasted until the third or fourth day of their cycle.

Now 67% isn’t a lot. If it was a school grade it’s be a D. But it’s a majority. The study had looked a lot of variables such as use of oral contraceptives, whether the woman was seronegative or seropositive and which treatment(s) she was on. There seemed to be no correlation between any of those things but they felt confident enough to suggest there is a correlation between menstruation and symptoms exacerbation.

I’m not sure what to do with this information other than NOT feel like I’m crazy. Should I take more medication around this time to try to offset my Morse Code woes? Or what about getting on a birth control that eliminated Morse Code all together? No cycle no problem right? The plan is to bring it up to my specialist during my next visit, which will be a little awkward because HE is a he. But oh well, maybe he knows something to do to try to mitigate this.

I can’t wait until Morse Code is over. So I can go back to flourishing in my new normal.

Traveling While Ill: MG in Vegas

Do you have Insomnia? Here’s how you know