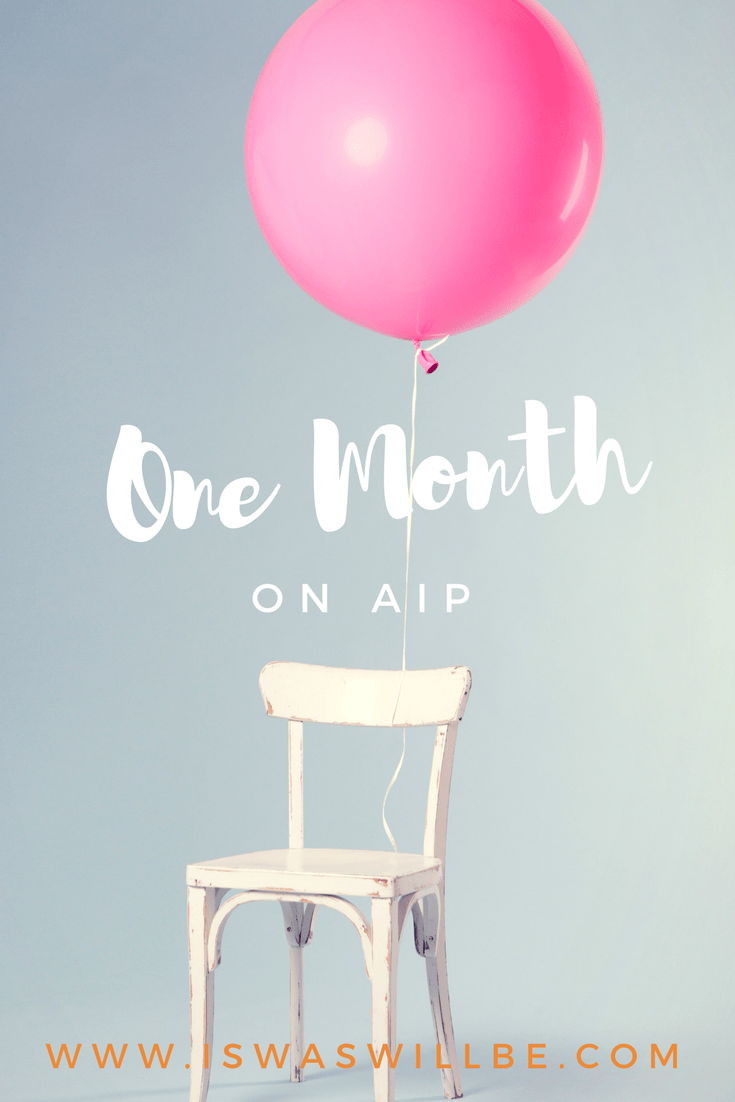 Guess What?!?!! I’ve officially completed one month AIP. Can you believe it? I can but I can’t. I told y’all at the beginning of the month that I was gonna commit to AIP and here I am on the other side of it. It wasn’t that I thought I was incapable of doing it. I just wasn’t sure if I was going to go through with it. Guess all that meditating helped me meet my goal.

So how was it?

If I being completely honest, it wasn’t horrible. It’s actually do-able (especially if you’re a meat eater). If you’re a vegetarian (or vegan) it could be more of a challenge because many of the main sources of vegan protein are not complaint. If I had to grade this month I’d give it a B-. I’m not a stranger to meal prep but I’m not a big fan of leftovers so I had to mentally get over that.

According to the research I had done I was very nervous about the detox period. So many reported symptoms similar to drug detox of chills, sweats, vomiting etc lasting 1-3 weeks. To my delight and amazement, my detox wasn’t that bad which I attribute to the fact that I already try to eat clean and balanced. Detox for me lasted maybe 2-3 days. I had a headache and was very very tired. Prolly was in bed by 5pm those days.

A trip to the movies almost took me off track because I love movie theater popcorn and the smell was tormenting me the entire time but I refused to give in. I even managed to go out to a restaurant and eat compliant. *dusts dirt off shoulder*. Committing to the diet wasn’t the issue. I feel like my greatest struggles were what to cook, how much to cook and what to season with.

To say my palate is limited, is putting it nicely. I’m always the picky eater in the group asking for them to give me my sandwich plain with nothing on it. You’d think that make the transition of going AIP easier huh? Nope. The AIP non compliant list took my already small list to miniscule.  I stayed mostly between chicken and seafood and sprinkled in turkey, pork and beef as much as my body would tolerate. Don’t get me started on breakfast man. No eggs, no toast, no oatmeal. Breakfast is basically now pre lunch.

After figuring out what to cook, I was hard pressed on the seasoning front. One of the non compliant items is pepper in all forms. So not only could I not use black pepper to season but I also couldn’t use any seasoning that contained black pepper. Do you know how many seasonings use pepper as a base?!! It’s even in most broths!

Coconut anything isn’t really my thing. I’m not allergic it’s just an acquired taste and although it’s listed as alternative to many things (oil, milk, aminos etc) I used it sparingly. So I just was not feeling the seasoning vibe. I probably could have used this as an opportunity to try fresh herbs and all that jazz but I have MG for goodness sakes. I’m tryna make my life easier not harder.

I got ordered this cookbook from amazon to give me ideas of different things to cook and how to prepare it so that it’s AIP compliant. I used the book maybe the first two weeks and then went rouge. Frankly because the food didn’t have enough flavor for my taste buds but also because the alternative compliant ingredients needed for cooking for out of my budget.

My appetite fluctuated over of the month. The first week I cooked enough for three meals a day and only ate twice a day (sometimes only once. I threw away so much food. So week two I cooked enough for two meals a day and was still hungry. Week three  I stuck with two meals a day but then just added a couple extra for just in case and ended up throwing those away. Week four I only ended up throwing out like two or three meals.

In the support groups, there are people that have been AIP for years. More power to them but I won’t be one of them! Not because it’s impossible to do, I just don’t feel it’s necessary for me. Also, the holistic doctor I saw told me not to do it beyond two months.

I only committed to doing one month of strict AIP and now that that’s over I’m going to start my reintros. There are a couple of reintro methods. One I read up on suggested tasting the reintro, waiting like 15 minute then having another bitte then waiting 45 min then eating the whole thing if everything seems ok. I’m NOT doing that. Who has time to heat up their food all those dang times? And if I’m hungry, I’m tryna eat not taste test.

What’s my first reintro gonna be? Pepper and the various seasonings that include pepper that weren’t AIP compliant. The biggest thing for me is flavor variety!!! I feel like I can go without grains and dairy as long as I’m not eating the same tasting foods every single day. So I’m starting there and will add more reintros as my body gives the greenlight. After seasonings will probably be eggs.

If my understanding of AIP is correct, the point of doing AIP and reintro is to get you to a form of Paleo that doesn’t inflame you. So that’s my goal. Paleo is permanently no dairy or gluten. I’d be setting myself up to say I’m going to be strict Paleo. My theory is everything in moderation. So I’m doing like an 80/20 Paleo thing.

To me what that means is that I’ll be eating strict (with my introductions) probably 6 days of the week and then have a cheat day. That’s pretty much the eating lifestyle I had pre diagnosis when I was focused on. Eat clean the majority of the time but leave room for fun. If I find that, this method doesn’t work FOR ME I’ll make adjustments. It’s all a work in progress.

Would I recommend it?

So in the autoimmune world AIP is kind of marketed as like this savior diet that will suppress or eliminate some of the most heinous symptoms. Some report that over time they’ve experienced major symptom reduction as well as weight loss. If you’re heavily plagued with symptoms, I don’t think it hurts to try it. You have nothing to lose. If you don’t like it, stop. It’s really that simple.

While I didn’t see any major changes in my symptoms or my body I’m glad that I did it. I will say that physically I feel like I’m less bloated. As I navigate through the reintro phase I think I’ll be able to better determine food triggers for me. But mentally… I feel invincible. It was a self esteem boost to set a goal and meet it. One thing I noticed was how much pointless eating I do, like snacking if I’m bored. Hopefully this helped break the twisted relationship I was developing with food. I want to eat to live not live to eat.

Have you tried AIP? Were you able to see any major changes the first month?

“Spoonie-preneur” – Starting a Business with A Chronic Illness