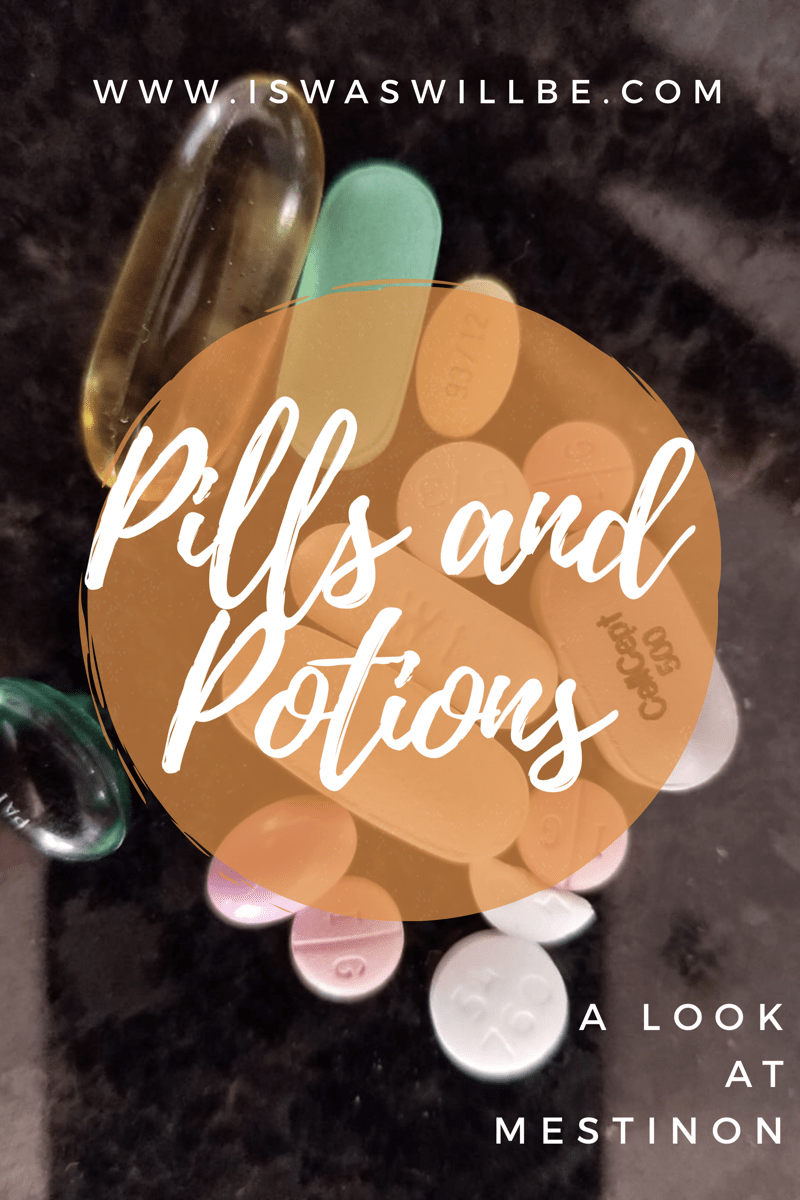 If you have myasthenia gravis the first thing you’ll learn is that there is no cure. However, over time and with medical advancement there are several treatments available to keep the systems managed. I’d like to start a new thing in which I breakdown the various medications and therapies for the treatment of myasthenia gravis: Pills and Potions. The very first medication is Mestinon.

When I was diagnosed with myasthenia gravis it was by a general neurologist. He wasn’t very familiar with MG but he knew enough to diagnose me and to start me on Mestinon. So shout out to him for that! Anyhow that’s when I was introduced to Mestinon.

Mestinon is available in three different forms: 60mg syrup, 60mg tablets or 180mg tablets. I was only offered tablets which was fine because that’s actually my preference. But if you’re one of those people who have a different time swallowing pills, syrup may be the way to go. I’ve had both the 60mg and the 180mg. The benefit of the 180 mg is that it’s a time span version. So instead of taking three 60mg tablets every 4 hours, you can take one time span pill and be good for 12 hours. In my opinion the less pills, the better.

Normal muscle function happens when your brains sends a message down the nerves of the muscle it wants to contract. The nerve releases acetylcholine which attaches to your muscle receptors and causes the muscle to contract. For some reason, when you have MG, your immune system clogs up those receptors as well as attacks that acetylcholine making it difficult for the muscle to function. That’s where the weakness / fatigue occurs. Mestinon combats fatigue by preventing or slowing down the breakdown of acetylcholine.

It would be nice if they medications we took just address the symptoms we were taking it for. However whenever you introduce foreign chemicals into your body, there is a probability that the body will react adversely to. Some of the side of effects of Mestinon are:

My Experience with it

Like I said earlier, Mestinon was my intro drug in the world of myasthenia gravis. The first two months I experienced a lot of the less desirable side effects like stomach cramps, nausea and diarrhea. Once my system got used to the medication that subsided but the other side effects like sweating, extra saliva, and muscle twitches stayed until I stopped taking them.

I started out with the 60mg tablets. Mestinon only lasts 3-4 hours depending on your metabolism. When it is out of your system you feel it almost immediately. My original prescription was to take 3 pills a day. But once spacing them out every 4 hours didn’t work well, I increased to 4 pills a day taking them every 3 hours. That worked ok for 12 hours of the day then I was miserable.

My specialist then granted me the 180mg timespan tablets for overnight use which gave me 24 hours coverage. I’m not sure why I couldn’t just take a 180mg timespan tablet every 12 hours but I guess there’s some reason behind it. I would have much rather taken 2 pills vs 6. Nonetheless having 24 hours coverage definitely helped the situation. The most noticeable difference was in waking up in the mornings. I could tell when I was overdue for my next dose just by how I was feeling.

So that’s my run down on Mestinon. I no longer take Mestinon but I’ll never forget it. I don’t miss those side effects at all, but it’ll always hold a place in my MG journey.

“Spoonie-preneur” – Starting a Business with A Chronic Illness

Do You Struggle to Self-Love with a Chronic Illness?