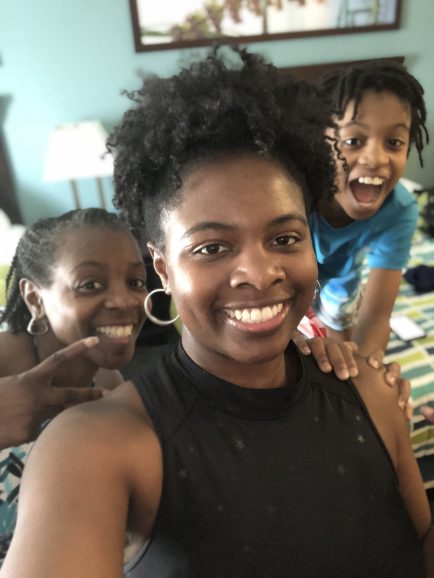 Ya girl went on her first family vacation since being officially diagnosed with myasthenia gravis (MG). You may not care but I do. My mom, brother and I went to Cedar Point to try out those great rollercoasters I’ve been hearing about since I was a preteen. If you didn’t know, I am an avid rollercoaster enthusiast. I like to sit in the front and keep my arms up the whole time. However, amusement parks aren’t the most MG friendly places. With my health in a much better place and me reclaiming some of the things I had put aside, I decided it was a good time to test my limits and ride some rollercoasters for the first time since MG diagnosis.

Vacationing with MG can always be a bit tricky. There are so many variables to consider such as temperature, level of activity, proximity to nearest hospital etc. I’ve learned a few tips and tricks as I took a trip to Miami last year with bae and then went to Vegas on a girls trip. Both of those vacations helped me pick up on a few tips for traveling with MG and just surviving the summer with mg in general. However, going on vacation with your family is just… different.

Anxiety about Family Vacations with MG

Like I said, I’m not a complete novice to traveling with MG during the summer. Yes there were some ups and down but my previous experiences were good overall. This trip was different because everything about this trip was unknown or different from transportation, to unknown weather to room and board. And let’s not forget to mention the amusement park aspect.

I’ve never been to Ohio before so I wasn’t sure about the weather. As I was researching places to visit for a family vacation, I saw that Cedar Point was located near a lake. Typically around water, things are a bit cooler so I found comfort in that. I originally planned this trip about a month and a half out so the weather estimates were in the 80s and I felt like I would be comfortable with that.

We (I) drove instead of flying. Flying, of course, is quicker but not economical when you are traveling as a family. So we rented a SUV for the 7 hour drive. We stayed in a hotel so that meant ONE room with double beds to share between the three of us. I live alone in a 3 bedroom townhome. So that was a bit cramped for my liking. When you’re used to solitude, being in a situation with a complete lack of privacy is culture shock to say the least.

Fears about going to an Amusement Park

The month before I was formally diagnosed with MG, we took a family trip to Orlando. That was a struggle. I believed I’ve talked about it before. It was so hot. I was miserable. The meds were kicking my tail. I was so tired and I felt like I was ruining the good time for everyone. We went to Legoland and the fatigue hit me so hard. I especially remember not being able to control my neck while riding the rides and rollercoasters.

In terms of amusement parks or any destination with large tourist attractions, I think MGers need to be aware of the amount of walking that’s needed, the amount of time waiting in line, the temperatures, and your level of weakness. Amusement parks and rollercoasters aren’t for the meek. Even the most healthy person may decide that it’s not for them because of all the walking, standing, jolting that’s associated. Not being able to control your neck, arms and legs is very UNcomfortable.

It was an awesome trip. I’m a planner at my core so after I locked down the location and the hotel. I made sure that I had as many amenities to make the trip a positive one. It was a little costly but I felt like coughing up the extra dough for the fast passes were well worth the money. I was absolutely right. Even in the fast pass lanes, there was a moderate wait of 15-20 min but it was nothing compared to the 45min to 1hr that others had to stand in line. There was a sky line ride that took you from the front of the park to the back of the park and we made use of that.

As far as riding the actual rollercoasters, the first 2 I felt off. I was tense because it’d been 3 years since my last coaster and I wasn’t sure how my neck was going to do. Because I tensed up, it was a bad ride. By the third coaster I reminded myself to breathe and go with the flow. I reflected on how much progress I have made in my healing journey and gave myself permission to enjoy something I love. So the park itself and the rollercoasters were great.

It rained intermittently and there was a slight overcast most of our stay. It worked out perfectly for me. Our final day the decided togo back to the park for one last go on our favorite rides before hitting the road back home. It was sunny and boy did I feel ever ray of sun. That lake didn’t provide much relief to me at all. The most uncomfortable parts for me was fighting over the temperature to keep our hotel room (my mom likes heat and I like cold) and the lack of me time. Also, I don’t sleep well when I’m not home. After the 3rd day, I was losing it and starting to feel stressed out and overwhelmed. There’s just no place like home.

Made it Back in One Piece

So there is it. My first rollercoaster with MG. Such a great memory and time. I know I talked a lot of trash but the best part about traveling with your family is that no one loves you like family. No one is going to cater to your illness and your needs like your mom. She constantly checked with me to make sure I was feeling ok. There was no qualms about me going back to the room early to rest or anything like that. Moms are MVPs.

10 Reasons Why You Should Drink More Water Sis

I Gained a Devastating 30 lbs on Prednisone