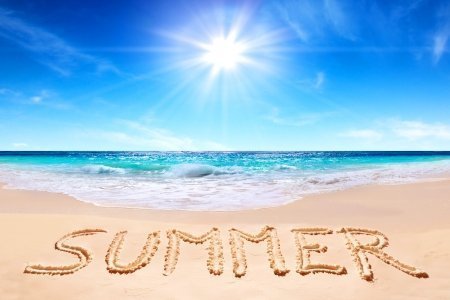 Most people love summer. It means cookouts, crabs, amusement parks, vacations, day parties and the like. What’s not to love? Now that I’ve experienced a Myasthenia Gravis summer- A LOT.

I think it’s safe to say that summer is here! For those with a blossoming social life, it’s lit (as the kids say). Every weekend day there is something to do – except if you have a myasthenia gravis.

Even as a child, I was never a fan of being hot. But I always managed to offset feeling like I was in Lucifer’s armpit with dressing lightly, cooling activities like swimming, lots of AC and my all time favorite: the coke slurpee. Needless to say my MG (and it’s best friend prednisone) has amplified my disdain for the heat and has also made it very difficult for me to take advantage of the greatness summer holds.

The summer before I was diagnosed I was killing it. YOLO (you only live once) was my motto. It was nothing to wake up and say I want to go to the beach today and do it. I frequented comedy shows and local events; went to my first multi day music festival and flourished with strangers; hosted weekly get-togethers at my house with friends and did the Wipe Out 5K run. Hands down, that may have been the best summer of my adult life.

Now let’s fast forward to the summer post diagnosis. In summary: it was a STRUGGLE. As an MGer, the heat and sun are like kryptonite. This is a lesson that I have learned the hard way. Immediately after my diagnosis, I went to Orlando for a week with my family and was utterly miserable. I would wake up in the mornings feeling soso and had maybe 3 good hours in me until I was physically done. With each step, my limbs felt heavier and heavier. Nonetheless, I pushed myself to do more because I was still in denial about my diagnosis as well as the implications and I didn’t want to ruin what could have been my last family vacay . So I sucked it up.

You’d think I would have had enough but no. A couple of weeks later, I went to Philly for the Roots Festival as well as the Beyonce concert, both of which were outside. In short, I was miserable (shocker, right?). I barely ate the entire weekend. I felt weak even though I was taking my medications. Again, I pushed through. The following week I went to Atlantic City for a bachelorette party. I was the organizer / coordinator. Event planning in general can be an exhausting and stressful task. Things weren’t perfect but I did the best I could.

Two weeks later I was a bridesmaid in an outdoor wedding. Due to the growing severity of my symptoms, the days leading up to the wedding, I started my IVIG treatments. The treatments left me with headaches, nausea and fatigue. I was urged to not do anything else while my body was adjusting to the treatments. But I didn’t care. I actually delayed one of my treatments that was scheduled the morning of the wedding. The night before the wedding I remember being in so much pain and discomfort. I made a little pallet in the bathroom and that is where I laid, crying and praying that I would be able to make it through the festivities next day. The last thing I wanted to do was pass out (or vom) during the ceremony or reception. Thankfully, my prayers were answered.

It was all good until…

The next weekend I went into the city and watched fireworks for 4th of July. After feeling sick for an entire day, I drove myself to the ER July 5th. I wasnt released from the hospital until July 8th. That was the first time I went to the hospital for my MG but definitely not my last.

When I was admitted, I was barely coherent. So I wasn’t able to give them all the necessary information other than I had MG and something was wrong. The neurologist on hand was not very familiar with MG. There is a blacklist of medications that you aren’t supposed to give a person with MG and of course they gave me a couple on that list. I’m not sure if any of you have every spent an extended amount of time in the hospital but if you haven’t consider yourself lucky and blessed.

I had a lot of time to think or maybe I was hallucinating. I replayed the events that led up to that moment, on about how my stubbornness to conform had landed me in a bed with wires, IVs and tubes sticking out of me. Having to admit to myself that my mother was right (Hate it when that happens!!) made me cringe. I shouldn’t have been going nonstop like that but I was so focused on not letting my diagnosis slow me down that it stopped me dead in my tracks.

Myasthenia Gravis Summer From Now On

This summer I have planned to do nothing. Seriously, those are my plans. Do little to nothing. Many people don’t realize how difficult it is to do nothing. I used to view it as laziness but I’ve come to view it now as solace and restoration. It’s apart of my treatment plan: Self Care. On the rare chance I decide to do something, it will be another few weeks before I decide to do something else. I schedule in plenty of rest time.

One of the most annoying and frustrating things (for me) is that people who know about my diagnosis will still try to pressure me to do things. A couple of weeks ago my office had a picnic and I declined to go. Do you know that minutes before the event was supposed to start, people were still trying to persuade me to go? I’ve even had friends try to guilt me into doing things with them by making comments like I suck for declining their invites. If it’s outside in the sun or is scheduled too close to another event of mine I won’t be there. Sorry. I’m not going to risk my health to make you happy. Call it what you want, but call me at home ok?

Lessons Learned about Summers with MG

Don’t get me wrong. I have my days when I suffer with major FOMO (fear of missing out). I see all of my friends having fun and living it up and it stirs up feelings of resentment towards my situation. But then I reflect back on last summer. It’s just not worth it.

Being able to recognize my limitations is a sign of growth and I’m super proud of myself. I’m not a hermit. If I was going to label it, I’d say I am just very selective in the events I participate in.

Can anybody else relate? What’s on your summer to do list? How do you manage your social calendar with your MG/autoimmune disease?

Toxic Positivity: When Being Positive is a Negative

One year down, a lifetime to go